The future is now… DCD-SEMI believes in Power of Innovation. Thanks to our revolutionary on-Chip Debugger, you can easily become a part of that innovation. The DoCD™ is a complete debugging system, dedicated for DCD’s DQ80251 / DQ8051 / DT8051 / DP8051x / DP80390x Microcontroller Cores. The system consists of three major blocks:

DoCD™ provides some serviceable features, like a real-time and non-intrusive debug capability, enabling a pre-silicon validation and post-silicon and on-chip software debugging. It allows hardware breakpoints, trace, variables watch and multi C sources debugging. The DoCD™ Debug Software can work as a hardware debugger, as well as software simulator – some tasks can be validated at software simulation level and after this step, you can continue real-time debugging by uploading the code into silicon.

As a DoCD™ user you’ve got a freedom of choice – you can choose your favourite C compilers or assemblers for software development – it supports most of High Level Object files produced by C/ASM compiler tools:

The  DoCD™ Hardware Debugger provides debugging capability of a whole System-on-Chip (SoC). Unlike other on-chip debuggers, the DoCD™ provides non-intrusive debugging of a running application. It can also efficiently save designer’s time thanks to a hardware trace called Instructions Smart Trace buffer (IST). The DoCD-IST captures instructions in a smart and in non-intrusive way, so it doesn’t capture addresses of all executed instructions, but only those related to the start of tracing, conditional jumps and interrupts. This method does not only save time, but also allows to improve the size of the IST buffer and extend the trace history. Captured instructions are read back by the DoCD debug software, analysed and then presented to the user as an ASM code and related C lines. 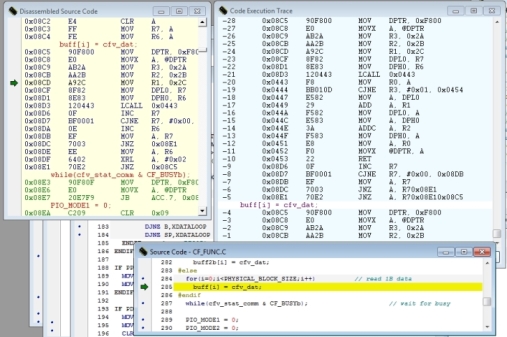 The reason for the development of the DoCD™ was to provide our customers with the ability of easy system verification and software debugging, at no additional charges. Therefore, we have decided to add the complete debug system to each 8051/80251/80390 IP Core – for free. Now DCD’s customers have the exceptional possibility to obtain the complete solution for making their own 8051/80251/80390 based, SoC, with the ability of pre-silicon validation and post-silicon software debugging in one place. It’s really an unusual opportunity for the designer to have the ability to get a high quality IP Core and unique on-chip debug tool from the same supplier.

Any cookies that may not be particularly necessary for the website to function and is used specifically to collect user personal data via analytics, ads, other embedded contents are termed as non-necessary cookies. It is mandatory to procure user consent prior to running these cookies on your website.